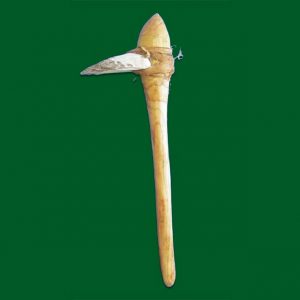 Shell hoes were also used for cultivation and digging. This shell hoe is modeled from a complete hoe found in a rock shelter in Arkansas. Made of freshwater mussel shell, wood handle and bark straps, like the original. Rawhide ties may be substituted for the bark straps.

The mussel shell hoe blades are found on archaeological sites on the Plains as well as the eastern United States.